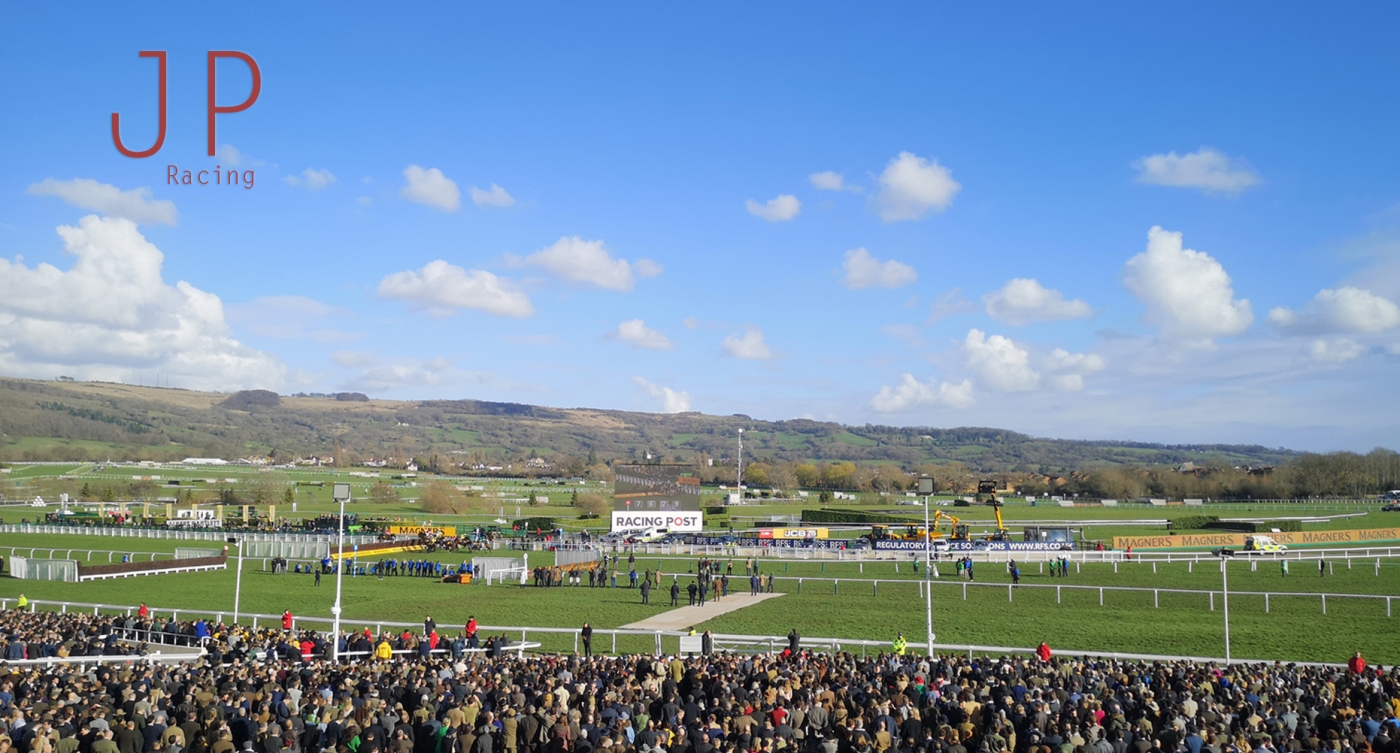 After a blistering start to the Cheltenham November Meeting with Castle Robin (10/1) and Magic Saint (10/3) both going in, I’m feeling good heading into Day 2, which of course features the Grade 3 Paddy Power Gold Cup Handicap Chase. Below you can find my selections for the action, alongside full reasoning as usual. Be sure to give me a follow on Twitter @JakePriceRacing for live updates throughout the Day, and to ensure that you see my daily selections going forward.

I thought there was only one Horse who could win this, and unfortunately the market is in agreement with Hell Red a short priced favourite. I was hoping that with the likes of Duffle Coat and Adagio turning up that we might be able to sneak a bit of 7/4 or such, but as we can’t I’m happy to leave this race alone and watch. What I will say however is that I think Hell Red is by far the best Juvenile to have run in Great Britain so far this season, and despite a very noticeable high-knee action which will surely see him to great effect on softer ground, he should be more than capable of winning the first Graded Juvenile Hurdle of the campaign. Not that it is a very original thought, but he is one that I’ve very much marked down for the Grade 1 Finale Juvenile Hurdle at Chepstow on Welsh National Day – where the ground is almost certain to be testing. Adagio was a Horse I really didn’t understand the hype about when he ploughed through the final two slights at Warwick last time out, and Duffle Coat will struggle to give away a 5lbs penalty to the Paul Nicholls runner – who obviously has his string in absolutely flying form lately.

It’s hard to have a strong opinion in this Conditional Jockeys’ and Amateur Riders’ Handicap Chase, but one I think is worth chancing is Colin Tizzard’s Lamanver Pippin. It’s been widely reported that Colin’s runners have needed their first runs of the season, but now we’re into the middle of November he really seems to have turned a corner – recording a double at Exeter on Wednesday and now operating at a 15% strike rate. Assuming he’s fit an ready to go, Lamanver Pippin looks to be the best Horse in this race to my eye, and stamina certainly isn’t going to prove an issue here. There’s not a lot to shout about on his Hurdles form, but since going over fences Lamanver Pippin has developed into a really nice type. Finishing fourth on Chase debut at Ffos Las in October last season, this seven-year-old put in a bold effort from the front, but a mistake at the second last ended any remaining chances he had. Having said this, the race has been working out well – with the winner being Poker Play (135), the second Sensulano (137) a subsequent Listed winner, the third Tidal Flow (146) a dual subsequent winner, and even the fifth Secret Reprieve (130) has ran well since. Lamanver Pippin went on to win his next start at Chepstow in a Novices’ Handicap Chase off a mark of 120 under Robbie Power, and then he was put away right up until the Cheltenham Festival. Contesting them 3m6f Grade 2 National Hunt Chase under Will Biddick, Lamanver Pippin once more ran a decent race over fences – finishing in third place. When you watch the race back then you can clearly tell that this Horse didn’t quite stay the extended trip, but he was still going well right up until the third last – so dropping back in trip to 3m1f at Cheltenham should be ideal. Although a long way behind Ravenhill (152) and Lord Du Mesnil (153), Lamanver Pippin did have Forza Milan (137) 3 lengths behind – so his Handicap mark of 132 looks fair enough. Considering Will Biddick has already had a spin on Lamanver Pippin, the pair should be capable of going well now back in Handicap company – and Will gets to take off 3lbs for good measure.

If the Colin Tizzard team haven’t already had a winner at this point then they will at least have a great chance in this Grade 2 Novices’ Chase, as Eldorado Allen looks like the bet to me. When you consider how many of Colin’s Horses were needing the run during October, then you have to mark up what was a very good performance from Eldorado Allen on his Chase debut at Newton Abbot. Contesting what looked like a strong contest on paper, this talented Hurdler made a brilliant transition to fences – with his Jumping a big asset. Turning into the straight Eldorado Allen Jumped his way into a lead heading towards the final flight, before absolutely ploughing his way through it – but he was still able to give 7lbs and a 2 length beating to Stormy Ireland (148). Obviously it was disappointing that the Paul Nicholls Mare couldn’t boost the form in a Listed race at Bangor this week when finishing second, but it was still an impressive debut from Eldorado Allen. With the benefit of having a run under his belt, Eldorado Allen looks to have a great chance now stepping up into this Grade 2, and he will certainly be helped by receiving 3lbs from the favourite Fusil Raffles. I can’t have Quel Destin making his Chase debut in a Grade 2 at Cheltenham of all places, and the others I feel will need to step up much more than Eldorado Allen needs to.

This looks as competitive a renewal of the Paddy Power Gold Cup as you will see, so rather than siding with one of the front three in the market who all have very solid claims (Saint Sonnet, Simply The Betts, Mister Fisher), I’m going to take a chance on one with a similar profile but at almost double the price in Al Dancer. This seven-year-old has some really good Novice Chase form to his name from last season, where he was exclusively kept over 2m. Winning on Chase Debut at Cheltenham last October, he then went on to finish second behind subsequent Arkle winner Put The Kettle On (154) at this meeting 12 months ago – not a bad effort when trying to give away 10lbs to the Mare. To decent efforts in Grade 2 company would follow, finishing 4th behind Global Citizen in the Wayward Lad Novices’ Chase at Kempton in December, before he then ran a cracker at Doncaster in the Lightning Novices’ Chase when only beaten a length by Mister Fisher (155) – a rival whom he will be 1lb better off at the weights with on Saturday. His last start of the season came in the Arkle when a pretty disappointing 5th, but he’s returned to action in top form now finally stepped up in trip. Contesting a Class 2 Intermediate Chase at Newton Abbot last month, Al Dancer carried a 6lbs penalty to victory in really nice style on his first attempt over 2m5f – beating Master Tommytucker (148) by 2.75 lengths. That rival has since come out and boosted the form this week by bolting up at Huntingdon in another Intermediate Chase, so Al Dancer doesn’t look badly treated from his official rating of 154. Considering how unexposed he is over this trip, I’m keen to give him a chance on Handicap Chase debut – especially as he gets on so well with the Cheltenham course.

Considering his performance in the Grade 3 Silver Trophy at Chepstow last month, I am all over Tea Clipper here. This Tom Lacey charge racked up a hat-trick of early-season Hurdles last year, scoring on his debut under rules at Warwick before then backing up under a penalty at Kempton. He then went to Huntington in December where he made a winning Handicap debut – beating Magic Dancer (123) by a neck to defy top weight and a mark of 127, despite only being a four-year-old at the time. That would end up being his last start over 2m too, as his next run came back at Huntingdon in February over 2m3½f when running a grand race off 130 to finish second behind Cervaro Mix (137) – when he also had useful Horses in Settie Hill (140) and Messire Des Obeaux (138) behind. Not seen since, Tea Clipper returned after a 247 day break when putting up a scintillating performance at Chepstow last month in that aforementioned Grade 3 Silver Trophy. Tea Clipper stayed on really strongly under pressure from Jonathan Burke to score off his new mark of 134 – beating Flash The Steel (141) by an impressive 2.25 lengths. Now stepping up in trip for the first time since his P2P victory at Larkhill in February 2019, Tea Clipper should be capable of improving further on what is currently perfectly good ground at Cheltenham (There is now rain forecast on Saturday, but I’d imagine Tea Clipper will be a NR if it gets too testing) – and I really fancy him to defy his new mark of 141 considering how unexposed he still is. This doesn’t look like the best Handicap Hurdle in the world, and Tea Clipper should take all the beating considering he only has to carry 11-2 thanks to Tobefair running.

Unfortunately he’s another fairly shortly priced Horse now having been well backed since declarations were made, but Son Of Camas looks absolutely thrown in on his Handicap debut in this 2m5f Intermediate Handicap Hurdle. This five-year-old easily won a Newbury Bumper in November last season by 2 lengths, before then making his Hurdles debut at Newbury’s Ladbrokes Trophy meeting and gamely beating subsequent Grade 2 placed King Roland (140) by a length. His next start came at Sandown in January for the Grade 1 Tolworth Novices’ Hurdle when finishing third behind Fiddlerontheroof (152) – and although well beaten that day in bottomless ground, he had excuses as he was sent straight for a wind operation afterwards. Stepped up in trip for the first time at the Cheltenham Festival in March, Son Of Camas was pulled up before the second last but once again he had his excuses, as he lost his left-fore shoe and was again sent for a wind operation straight afterwards. Now returning to better ground at Cheltenham after a nice long break, Son Of Camas will get to make his Handicap debut off an opening mark of 133 – which makes his very well treated on his best form to date. He obviously will need to show a lot more than he has done on his latest two starts, but Nicky Henderson has his horses absolutely flying along lately (28% strike rate last 14 days) and knows how to ready one for their reappearance. This well-regarded type could be a complete Handicap blot if his issues are all sorted.